Bo and the Mammoth

Laura is reading a book about cavemen with Hamtaro before she once again falls asleep.

They are in a dream where two tribes are fighting for food. However, Hamtaro and Stan resolve this argument and decide to share the seeds. But it's all gone! From both tribes! Bo had eaten them all! But wait! He can also fly! He says that he will repay the tribes by building a bridge from a rainbow using his magical umbrella. But it is gone!

Asking Elder Ham where it could possibly have gone, he sends them on a wild goose chase for it, but without any prevail. Finally, he sends them to search for a mammoth. Hamtaro and Bo are swallowed! They tickle the mammoth so that it would sneeze and let them free.

It turns out that Elder Ham had the umbrella the whole time! In the end, Bo repays them by building the bridge.

See also: Bo and the Mammoth/Gallery 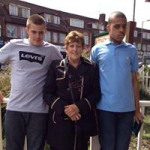 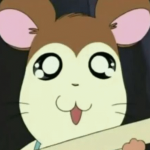