Wasabi Mizuta
Buster (たいほくん) is a police/security guard Ham-Ham who appears in Hamtaro: Rainbow Rescue and some of the Japanese episodes.

In the anime series, Buster is usually seen chasing down an escaped "criminal", Ook-Ook. When the Ham-Hams first meet Buster, he tells them that if he doesn't arrest Ook-Ook, it will "mark the end of the world". The Ham-Hams take this seriously, and help him catch Ook-Ook. But after he is finally caught, Buster says that his desire to bring Ook-Ook to justice was just part of a game they were playing, and that they are good friends in reality. 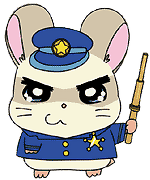 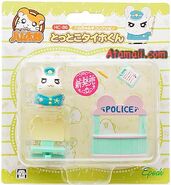