Yoshiko Kamei
Drizzle (くろハムくん) is a Ham-Ham who appeared in video game, Hamtaro: Ham-Ham Heartbreak and the episode of the anime series, Let's Travel, Ham-Ham Train!. In the game, he is a newspaper editor and works with Radar. They appear at the end of the game in Spat's castle to report the event. In the episode, The Sunflower King turned him into a dragon made of clouds with his magic staff, but turned back into a hamster when he was defeated. 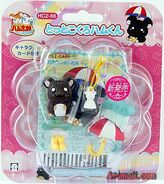