Note: This character's name is derived from Japanese, as no official English name is known.

Male
Haisha (はいしゃくん) is a dentist hamster who appears in the Hamuchanzu de Gozaimachu! manga series. He loves to brush his teeth, and always carries around a giant toothbrush.

Haisha did not have any major roles in any Hamtaro media; outside of appearing on a few trading cards, and having small cameos in Gozaimachu! Vol.2 and Vol.3. There is also an XLC Co. figure of him; the figure has something on top of his head, possibly toothpaste or a breath mint, that his official artwork lacks. 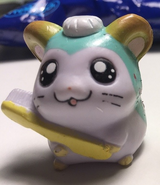