The Hamtaro Wiki
Register
Don't have an account?
Sign In
Advertisement
in: Characters, Hamsters, All Males, Males

The Hambini (ちびちゃんず) are three young, mischievous hamsters. They are owned by a nice woman. Flora and the Ham-Hams take care of them sometimes. They also appear in Hamtaro: Rainbow Rescue. 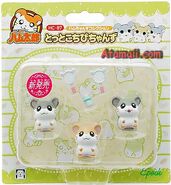