Hamstarr's first major appearance was in Tottoko Hamutaro: Tomodachi Daisakusen Dechu. According to the game's guidebook, Hamtaro jumped out of his cage and went exploring; being led to a mysterious room, in which he found Hamstarr. Being a master at fortune-telling, Hamstarr told Hamtaro and his friends (and the player) their fortunes, and predicted their future love-lives, through his magical book.

In Hamtaro: Rainbow Rescue, Hamstarr has his own mansion. Howdy was working part-time at his place in exchange for a purple marble, which the Ham-Hams needed for Prince Bo's rainbow. He also appears on the Ham-Ham Clubhouse's television in a program called "Hamstarr's Horoscopes", where he will tell the daily horoscopes. He returns in Hamtaro: Ham-Ham Games, and can be found in one of the Ham Studio's rooms. He appears on the Clubhouse's TV again, in which he tells others' fortunes. Listening to his program can get the player costumes or sunflower seeds.

He also has a small speaking role working at a street market booth in Hamtaro: The Captive Princess, although his markings are different from how they appear in the games. He is referred to as just "Card seller" (カードウリ) in promotional material. This is the only appearance of Hamstarr in the anime series.

Hamstarr in the coloring book in Hamtaro: Rainbow Rescue. 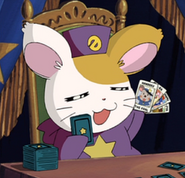 Hamstarr's appearance in the film, Hamtaro: The Captive Princess. 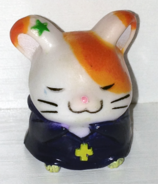