Hamtaro: Starry Night Tour (哈姆太郎 星夜遊) is a PC game released in Taiwan at an unknown date. It was released alongside a similar companion game known as Hamtaro: Starry Sky Romance.

The game appears to be a minigame compilation, and seems to be themed around the constellations. Judging by screenshots of the game, there is a spot-the-difference game, a maze game, and a seed-collecting game with Sandy, among others. However, very little other information about the title is known. 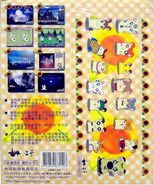