In 2000, Japanese toy manufacturer Epoch released a series of Hamtaro figures, alongside furniture and playsets. It is by far the biggest series of Hamtaro toys, with over 150 unique figures produced across multiple regions. The series went on to feature almost every hamster from the Hamtaro franchise, including ones from the mangas and video games. They were distributed in North America by Hasbro, and also saw release in Italy and China.

(* = different pose/sculpt than the Epoch release.)

The figures of Lolly (XLC-31) and Ice (XLC-54) may be in very slightly different poses than the Epoch counterparts, but this cannot be confirmed. Any other skipped numbers are identical molds to Epoch/Hasbro figures.

An incomplete list of re-released variants of the Japanese figures and playsets, often in the form of bundles. Several of the repackaged playsets had exclusive figures (listed in figures section above), and exclusive furniture parts (not listed).

A separate set of Epoch Hamtaro toys. They are much smaller than the other series, and most are based on already existing playsets. The figures were not sold separately.

Add a photo to this gallery

Set 2
Add a photo to this gallery 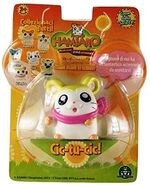 Pashmina waving (3-inch version)
Add a photo to this gallery

Ham-Ham House stacked on top of The Clubhouse
Add a photo to this gallery
Retrieved from "https://hamtaro.fandom.com/wiki/Hamtaro_(Epoch_figure_series)?oldid=35379"
Community content is available under CC-BY-SA unless otherwise noted.