3000 Hammy Steps In Search Of Mommy (ハム太郎のおたんじょうび〜ママをたずねて三千てちてち〜) is a special episode of the anime series, Hamtaro.

Laura tells Hamtaro about his mother, Just in time for his birthday, Hamtaro sets out with Boss and Oxnard to visit his mother to see if what Laura said is true, while the other Ham-Hams set up a surprise birthday party for him.

Note: When this episode was aired in America, the entire adventure was edited out, showing only the beginning where the Ham-Hams were telling everyone to keep Hamtaro's birthday a secret and the ending where all the Ham-Hams are singing for Hamtaro's birthday. This was because ShoPro decided that the OVA was too deep for children. It was also aired with the second OVA Ham-Hams Ahoy!/Ham-Hams and the Treasure Hunt!.

Join the Nam-Hams for a special two part birthday episode! In the first part, a special episode called "Ham-Hams Ahoy!" The Ham-Hams meet a hamster named Haibi while Laura is away at summer camp. Haibi is searching for a special treasure to help out her ailing grandmother, guided only by the words of a special song that her grandmother taught her. The Ham-Hams join her on her search, which takes them to Cape Gourd, then to Razzle Dazzle Beach and finally to Hamasea Island. They face a number of difficult trials along the way, but they're determined to stick together as a team and help Heidi find the treasure she seeks. In the second part, the ham-hams throw a giant birthday party for Hamtaro and Cappy and you're invited! Watch and listen to some great musical numbers, followed by the big birthday bash, "Happy Ham-Ham Birthday." Then, stick around for a birthday role-call of all of the main Ham-Hams. 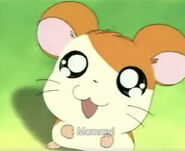 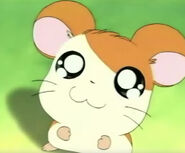 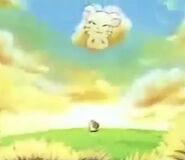 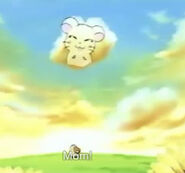 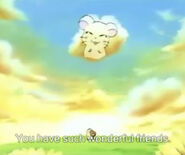 Add a photo to this gallery

Retrieved from "https://hamtaro.fandom.com/wiki/Happy_Birthday_Hamtaro_Special!?oldid=34505"
Community content is available under CC-BY-SA unless otherwise noted.