Hi! Hamtaro: Ham-Ham Challenge (とっとこハム太郎 は～い! ハムちゃんずのハムハムチャレンジ! あつまれは～い!), is a minigame collection for the Nintendo DS, developed by AlphaDream and published by Marvelous in Japan, 505 Games in PAL regions, and Natsume in North America. The game was released in Japan in 2007, and other regions in 2008. It is based on the Tottoko Hamutaro Hai! TV series.

The player navigates Hamtaro to explore an outside area. He meets with the other Ham-Hams in order to play a variety of brain-training minigames. They are mostly educational, and were mainly designed for elementary-grade children. The minigames are:

Parents can monitor their children's progress and even reward them with items based on their scores. 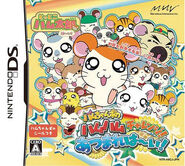 Japanese box art.
Add a photo to this gallery

Retrieved from "https://hamtaro.fandom.com/wiki/Hi!_Hamtaro:_Ham-Ham_Challenge?oldid=37966"
Community content is available under CC-BY-SA unless otherwise noted.