Note: This character's name is derived from Japanese, as no official English name is known.

Male
Ken (けんちゃん) is a hamster who appears in the Hamuchanzu de Gozaimachu! manga series.

Ken was reportedly created as an entry in a Hamtaro "Friend Contest" held in the Shogakukan Learning Magazines (most likely the August-November 1999 contest in "Second Grade"). In a written post by the contest winner, a Ritsuko Kawai-signed, framed image of Ken and Hamtaro was attached - presumably a contest prize. Currently, Ken is the only character confirmed to have originated from a Friend Contest.

Ken did not have any major roles in any Hamtaro media; outside of appearing on a few trading cards, and having small cameos in Gozaimachu! Vol.2 and Vol.3. There is also an XLC Co. figure of him. 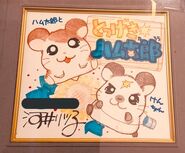 The Ritsuko Kawai-signed picture presented to the Friend Contest contestant 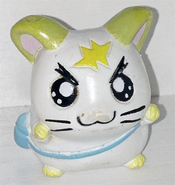