Noriko Shitaya
Malta (シェイクちゃん) is a Ham-Ham who appears in some of the Japanese episodes.

Malta lives in a mansion with her very rich owner, the butler, and the guard dog, Bakasu. Every day, Malta goes on walks with her owner, with the butler carrying her on a custom-made hamster bed. She is quite shy and somewhat unworldly, as she is doted on by her owner and has a lavish lifestyle.

Malta first met Tater after he caught her from falling. The two fell in love at first sight. However, it wasn't long before her frazzled owner whisked her away. She realizes she wants to see Tater again after reflecting on how he had saved her from falling. After escaping her house out through the window, she finally reunites with Tater and is overjoyed. When he offers to share his "very very hot fries" with her, she gladly accepts, and the two seem to have become a couple after that.

Broski once had a crush on her, and his attempts to woo her threatened Tater and Malta's relationship. This leads to Tater challenging Broski to a "very very hot battle" to see who could win Malta's heart. However, after Broski found out she was truly in love with Tater, his crush died out and the two became friends. 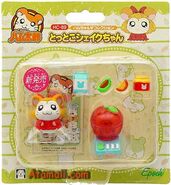