Marcella Silvestri
Nin-Ham (ニンハムくん) is originally from Iga lga Valley. However, he is not a very good ninja. He actually failed his ninja test, But, he lied about it and tried to "teach" the Ham-Hams. But, they found out he was lying and he finally told the truth. He tries hard to be a good ninja, though.

A ninja hamster who comes from Iga Iga Valley. Being the worst ninja in his home, he left so he could be appreciated by non-ninja Hams. 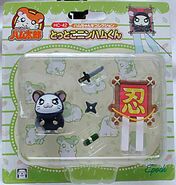 Japanese figure of Nin-Ham.
Add a photo to this gallery
Retrieved from "https://hamtaro.fandom.com/wiki/Nin-Ham?oldid=36299"
Community content is available under CC-BY-SA unless otherwise noted.