Rie Kugimiya
Ook-Ook (ウキハムくん) is a hamster who appears in Hamtaro: Rainbow Rescue and in some of the Japanese episodes. He is an energetic and peppy hamster who strongly resembles a monkey.

In the anime series, Ook-Ook first appears in Cheerful Ook-Ook!. The Ham-Hams are initially confused by his monkey-like appearance, but Penelope (translating on behalf of Ook-Ook) insists that he is a hamster. Shortly after this, Buster arrives on the scene, claiming that he needs to arrest Ook-Ook immediately; the Ham-Hams take this seriously, and help Buster catch Ook-Ook. After he is finally caught, however, Buster says that his desire to bring Ook-Ook to justice was just part of a game they were playing, and that they are good friends in reality.

Ook-Ook returns in Happy Ook-Ook, which reveals that he lives in a monkey reserve at a park. While technically still a hamster, he seems to get along well with the other primates, and is able to communicate with them.

In Cheerful Ook-Ook!, Ook-Ook can only speak by going "Ukii! Ukii!" (similar to Penelope's "Ukyu"). In Happy Ook-Ook!, however, he can say a few other words (much to the Ham-Hams' shock), though still only speaks in one-word sentences. 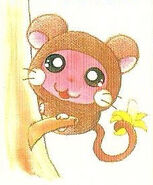 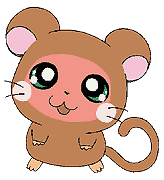 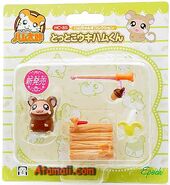