Oshare (おしゃれちゃん) is a Ham-Ham who appears in some of the Japanese episodes. Her fur is a similar color to Pashmina's, but it comes down a bit further between her eyes and she has rosy cheeks. She wears a gardening hat and is from France, like Bijou.

Oshare is owned by Katrinne, an old friend of Bijou's owner Maria. Bijou and Oshare are also friends. Both Oshare and her owner are Parisian supermodels, and because of this, and also the fact that she has a crush on Hamtaro, Sparkle sees her as a rival. She speaks in a thick French accent, often mispronouncing the Ham-Hams' names and other words, much to their dismay.

Despite her beauty and her fashion sense, Oshare doesn't seem to care much for anyone save for her owner, although she warms up a bit later on. She's gone through two lovers before falling in love with Hamtaro, showing that she gets tired of her companions easily.

She is a bit of a show-off and rather selfish, shown when she broke Bijou's chocolate heart that was made for Hamtaro. Despite this, she has a good friendship with Bijou. She enjoys her life of luxury and became distressed when she lost it.

Bijou was a friend of Oshare's back when she lived in France. When Oshare revealed that she was in love with Hamtaro, Bijou was upset with her. They, along with Sparkle, compete to give Valentine chocolate to Hamtaro. When Hamtaro leaves before they can give him their chocolate, they agree to be friends again.

Sparkle first meets Oshare when she comes to visit the Ham-Hams for Valentine's day. Sparkle and Oshare become rivals when Sparkle finds out that not only is Oshare a famous model, but also that she has a crush on Hamtaro. She makes fun of Sparkle's "nano", taunting her by using it in her sentences. While competing in a race to give Hamtaro Valentine chocolate, Oshare collapses due to exhaustion. Sparkle and Bijou carry Oshare to the finish line only to discover Hamtaro has left. Oshare, Sparkle and Bijou agree to become friends.

Oshare fell in love with Hamtaro somewhere between the episodes Non Non, Oshare! and A Valentine Battle!. In A Valentine Battle!, Oshare visits the Ham-Hams so she can give Hamtaro a Valentine chocolate. Hamtaro is completely oblivious to Oshare's feelings for him.

Shinsaku was a hamster from Japan that Oshare had a crush on. When she returns to Japan in Non Non, Oshare!, she tells the Ham-Hams that she is no longer in love with him for it was "meaningless love" and that she is in love with another hamster.

Although he is only shown in a photo, Oshare carried his picture close to her, similar to what she did with Shinsaku's photo. She seems to have liked him a lot, excitedly thinking about all the things she'll tell him when she returns. However, she dumps him and falls in love with Hamtaro by the next episode she appears in.

Oshare was infatuated with Boss when he acted like a samurai in Bonjour, Oshare!. However, she later then said that she got a better understanding of Shinsaku's culture thanks to him and that she was glad to have met him. She doesn't seem to like Boss much anymore in Non Non, Oshare! because of his strange behaviour and antics. However, she seems to be friendly with him anyway. 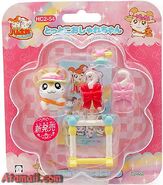 Japanese figure of Oshare.
Add a photo to this gallery

Retrieved from "https://hamtaro.fandom.com/wiki/Oshare?oldid=33935"
Community content is available under CC-BY-SA unless otherwise noted.