The Hamtaro Wiki
Register
Don't have an account?
Sign In
Advertisement
in: Characters, Humans, Males,
and 3 more

Gianluca Iacono
Phillip Yoshi (山田 一郎 Yamada Ichirō, later 稲鳥 一郎 Inetori Ichirō), better known as Mr. Yoshi, is Laura's teacher. Mr. Yoshi is extremely enthusiastic about his job, and has a morbid fear of chickens. Unfortunately for him, he sometimes has to take care of the school roosters, the Chicken Trio. To win the heart of Charlotte Rooster, Mr. Yoshi briefly overcame his fears, and married her in How to Rescue a Wedding! Mr. Yoshi is sometimes at odds with Charlotte's father, Chairman Rooster, due to him wanting Charlotte to marry a rich family. Later in the series, Mr. Yoshi and Charlotte have a child, Yamato Yoshi, who the Ham-Hams have to sometimes protect. 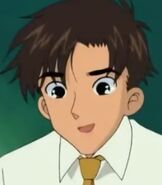