The Hamtaro Wiki
Register
Don't have an account?
Sign In
Advertisement
in: Characters, Humans, Males,
and 2 more

In A Pinch A Rival Appears!

Massimo Di Benedetto
Roberto Arvelo (ロベルト高城) is Laura's classmate and one of the players on the school soccer team. Roberto is a very arrogant but talented soccer player who often argues with Travis and Laura. He is fond of Laura's dog Brandy, and has a puppy of his owned named Samba, who debuted in Who Stole My Shoe?.

He seems to have a small crush on Laura, such as in I'm Parting, Clubhouse!, when he expressed that he was happy when Laura announced that she was not really moving away. He also risks his own life for Laura on certain occasions, such as in Duel at Flower Ranch, when he rescues her from a recently startled runaway horse, in Don't Give Up, Laura! when a kick with his soccer ball collides with another soccer ball that is just about to strike Laura down, and in There's a Monster in the School!, when he protects both Laura (and Kana Iwata) from a presence in the school which was frightening the both of them. It was even hinted by Samba, Roberto's own dog, that he had a slight crush on Laura in The Talking Dog Cookies.

Though he was stubborn and egotistical at first, his attitude gradually changed, revealing his kindhearted side. He claimed he does not like rodents, and appeared rather distressed when he met Hamtaro for the first time, calling him a rat after "saving" Laura and Kana from a speeding car while they were crossing the road. Though he is very good at soccer, he sometimes forgets to pass the ball, as seen in In A Pinch A Rival Appears!. Later in the episode, Hamtaro, Oxnard and Boss try to teach him a lesson for insulting Hamtaro. He then saves them from a cat that was chasing them, but it becomes apparent that he can not tell the difference between rodents after calling them "chipmunks". In Ham-Ham Halloween!, he dresses up Samba as a gremlin by putting a mask on the puppy, succeeding at scaring Laura and Kana who had been late to his Halloween party. 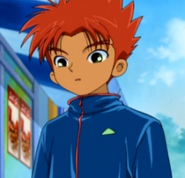