Skyham's dream is to cross the sky. When the Ham-Hams first met him he could hardly get off the ground and ended up crashing, so they decided to help him out. Panda built him a hang-glider so he could fly (or rather, glide) and achieve his dream of crossing the sky. He also had a crush on Pashmina, but it turned out she didn't feel the same way and only liked him as a friend.

Despite the two not getting along very well, he and Okini are also friends.

Skyham becomes annoyed when someone tells him to give up his dream to fly. He also hates when Okini insults his dream and shows no concern for him.

He is a very determined hamster who dreams of flying no matter how many times he crashes to the ground. He always flies with the hang glider Panda made for him. He can also be shy when seen by other hamsters. 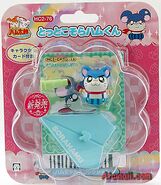 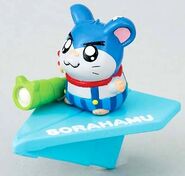 Skyham and Boss as a Chicken costume

Skyham and Boss as a Birds costume

Add a photo to this gallery
Retrieved from "https://hamtaro.fandom.com/wiki/Skyham?oldid=33841"
Community content is available under CC-BY-SA unless otherwise noted.