The Snow Hams (スノーハムず, Sunō Hamuzu) are a race of gentle of hamsters living in Aurora Village. They make their appearance in the third movie, Hamtaro: Ham Ham Grand Prix - The Miracle of Aurora Valley. According to Maxwell, they're deemed to have gone extinct in the modern day, though this is revealed to be due to their reclusive nature and because their natural habitat, the snowy valley area, has almost gone from Earth due to lack of snowfall in the recent years and the rise of temperature, leaving Aurora Valley as their last sanctuary that would soon perish has the prophesized Legendary Snow Princess not been brought to the village and pray for the snow to fall again.

Two of them are major exponents of the race:

Another remarkable Snow Ham is an old one:

Finally, in the promotional art five hams appears as representative of all the other Snow Hams. One of them has also a short line in the movie, and all of them are closeup in the Ham-Ham Festival scene:

One of the five

A Snow Ham as seen in Maxwell's book 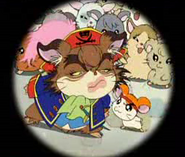