Story of Seasons: Trio of Towns

Story of Seasons: Trio of Towns (牧場物語 3つの里の大切な友だち) is a game for the Nintendo 3DS. The Japanese version of the game features Hamtaro as a character.

Before the release of Ranch Story: Cherished Friends of Three Towns in Japan, it was announced that Hamtaro would be an obtainable pet within the game. Kurumi Mamiya, Hamtaro's Japanese voice actress, returned to voice some lines within the game. Hamtaro will follow the player around as their pet; it seems that he can also help you harvest sunflowers.

It was announced that the game would be released in North America in 2017, under the name of Story of Seasons: Trio of Towns. Over Twitter, Chiara Zanni expressed her interest in returning to voice Hamtaro for the game.[1] However, in a blogpost titled "A Dearly Departed Hamster", it was revealed that Hamtaro would only exist in the Japanese version. The developers explained the unfortunate circumstances, claiming that they truly wanted Hamtaro to remain in the English release; but for complicated reasons (hinted at being legal-related), he couldn't make the final cut.[2] 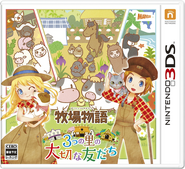 Hamtaro in the game.