Sweet Paradise (すい〜ちゅぱらだいす) is a magical candy world that Hamtaro and his friends played in after they met Lapis and Lazuli. A special stone was needed to keep it from disappearing. Omar took the stone by accident in The Sweet Paradise Disappears, when Oxnard gave it to him, thinking it was his. Also, Spat stole the stone in Devi! Big Panic! Sweet Paradise mainly consists of mountain and hill ranges made of sweets, as well as all nature (trees, etc) being made of sweets. Even the ground and lakes are edible. The main attraction is the Candy House. Snoozer sleeps in here most of the time from Lapis and Lazuli to Here I Am, Clubhouse!. It houses the entrance/exit to the Jewelry House, which in turn marks the pass back through to the overworld. The entrance/exit on the Sweet Paradise end is a large square hole made of sandwiches in the bottom of what appears to be a candy fireplace. The Candy House also contains Lazuli's magic cauldron, where she prepares various concoctions and magic spells. It also transports the Ham-Hams to various other dimensions and far-away places in some episodes. The Candy House also holds the magic jewel that powers Sweet Paradise.

An array of creatures live in Sweet Paradise, including the Candy Unicorn (in A Mischievous Unicorn!) and the Sweet Butterfly (who was once the vicious Sweet Worm in Sweet Worm Surprise and the following episode).

Other attractions include a candy orchard where Lapis and Lazuli grow various foods that usually do strange things when eaten (grow or shrink hamsters, make hamsters hungry, etc), and also a candy amusement park, of which the construction was never shown.

The Ham-Hams visit Sweet Paradise almost every episode starting from Lapis and Lazuli and the final visit being Devi! Big Panic!, which respectfully are the starting and ending points of Tottoko Hamutaro: Ham-Ham Paradichu (Season #3). 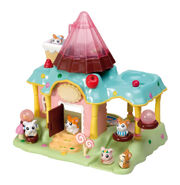 A playset of the Sweet Paradise Candy House.