Loredana Foresta
Tater (ポテトくん) is a Ham-Ham who appears in some of the Japanese episodes. He owns a burger stand where he sells Sunflower Seed Burgers. He has a crush on Malta. 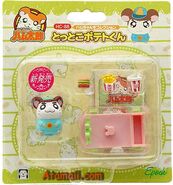 Retrieved from "https://hamtaro.fandom.com/wiki/Tater?oldid=38023"
Community content is available under CC-BY-SA unless otherwise noted.