The House at the Sea!

The House at the Sea! (とっとこ夏だ! 海の家) is the 108th episode of the anime series Hamtaro.

Laura, Kana and Laura's mom & dad are taking a trip to the beach, and as usual, the Ham-Hams have snuck aboard. Boss is wearing his beach attire, and is singing about how he loves the sea. The other Ham-Hams remind him of how he gets seasick easily, like last time, and Bijou says that a dizzy Boss is not cool, embarrassing Boss. Boss says he will not get seasick this time so he can impress Bijou. The bus reaches the beach and Laura's mom mentions they'll be going to the old restaurant they went to last time. Laura and her family are looking for a spot on the beach when Roberto pops out of the sand. He and Laura start arguing when Travis and the soccer team walk up. As it turns out, Mr. Yoshi rented the soccer team a house nearby for a soccer camp, and they're going on a trip to the beach as well. Travis invites Laura and Kana to sit in their spot with them, which Laura of course accepts. Meanwhile, Boss is standing by the sea playing his guitar, trying to get Bijou to join him on a trip on the sea. Unfortunately for Boss, she and the other Ham-Hams are busy playing in the sand, paying no attention to him. While Boss' heart (literally) burns for Bijou, the Ham-Hams notice Laura and her family are going to the restaurant and follow them, leaving Boss to catch up. However, the restaurant has been rocked by a recent tornado, leaving it in pretty poor shape. Even worse, a new restaurant next door has taken a lot of their business. The combination of the storm, the decrease in business, and their age has made the owners consider closing the restaurant. Laura's family disagrees, saying that their traditional style is much better than the modern restaurant next door. Laura's family (and the Ham-Hams) decide to help out around the restaurant, but Boss runs off, as he has to train to become "a cool hamster of the sea". Boss tries to train himself with a small cup inside a bucket, but even this much is able to make him seasick. Suddenly, a bird swoops down. Boss jumps out in fright, but it turns out it just wanted some breadcrumbs on the floor. Boss starts throwing the crumbs so the bird will catch them, and gets an idea. Back at the restaurant, the Harunas and Kana are trying to fix up and promote the place. The Ham-Hams are also trying to attract people to the restaurant, in their own way. Unfortunately, the only customers they can attract are the soccer team. The team enjoy the food, and decide to help fix up the place. The Ham-Hams want to help too, but they hear Boss cry out and go check on him. It looks like Boss is being attacked by the bird, but it turns out he has made friends with it. Boss gives Bijou a crumb to give to the bird, and she says that Boss is cool. More birds show up, and the Ham-Hams have fun feeding the birds. Meanwhile, with the help of the soccer team, the restaurant has been fixed up, but the place is still mostly empty. Then, they notice the birds eating the bread crumbs, and decide to feed them too. A crowd forms around them, and suddenly everyone at the beach wants to feed the birds. Travis tells everyone they can buy bread at the restaurant, attracting a lot of business, with people buying food at the restaurant as well. Later, Laura, Kana and the soccer team play together in the ocean, and everyone (including the Ham-Hams) are tired on the way home. Hamtaro and the Ham-Hams notice the birds flying by the bus, and say goodbye to them.

Main article: The House at the Sea!/Gallery 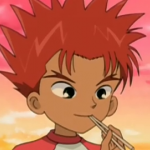