Rie Kugimiya
Tomy-T (トマトくん) is a hamster who appears in Hamtaro: Rainbow Rescue and in some of the Japanese episodes. He is a vegetable gardener, and is close friends with Eggy-P and Marron.

Tomy-T lives on a delectable vegetable garden, which he maintains with his co-worker, Eggy-P. The two hold a brother-like bond, and are never seen away from each others' side. The Ham-Hams love to visit their garden to feast on the crops - and generally provide a little gardening help too.

He and Eggy-P are also friends with Marron, and she claims they are her brothers (though it is never confirmed by either if this is true). Due to Marron's younger age, Tomy-T and Eggy-P have to look after her, acting as her guardians. While she is not as strong as her "brothers", she still helps the duo out in the garden whenever possible.

Tomy-T has the unique trait of turning a furious shade of red. At first, it looks as if he does this when angry or frustrated; but in Marron's Autumn Festival, he does this when the Ham-Hams say they will help them with the harvest, because "that's what friends do". As such, it may just be when he is under intense emotion, and not solely to indicate anger.

The leaves on Tomy-T's head are tomato leaves. This refers to his Japanese name "Tomato" and his English name ("Tomy-T" and "tomato"; also the "T" standing for the "to" in "tomato"). He is never seen without his red sweater, which also makes him look more like a tomato. 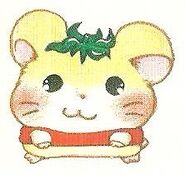