Tottoko Hamutaro: Hamuchanzu de Gozaimachu! Vol.1 is a manga released in 1999 by Shogakukan Wonderland Books. It is a compilation of stories previously seen in issues of Shogakukan Learning Magazine's "Second Grade". The manga features what are seemingly the first appearances for many of Hamtaro's friends, including Bijou, and Oxnard. It was followed by a Volume Two and Three.

This book was seemingly planned to be released in English, renamed to Playful Hamtaro and Other Stories. It was never released, however, only being advertised in the back of Jealous Hamtaro & Other Stories as "coming soon". It would have been the fourth English release of the Japanese Hamtaro manga series.

Hamtaro and his friends live in a pet store run by Grandpa. The Ham-Hams are treasured by Grandpa so much that he refuses to sell them there. They live together in the Ham-Ham House, which Grandpa built for them. But when Grandpa falls asleep, the Ham-Hams run out of the cage and play. While playing, Hamtaro got stuck inside of a glove's thumb. Grandpa cut the glove to save him, leaving Hamtaro in a red shirt - perfectly resembling his grandson, Akun's, sweater.

More to be added later.

Back cover without sleeve.

Cover of Playful Hamtaro and Other Stories, the unreleased English version. 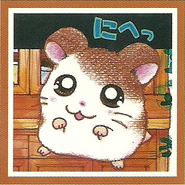 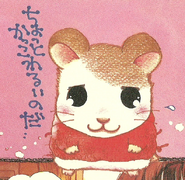 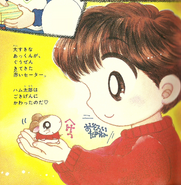 Cappy and Oxnard
Add a photo to this gallery
Retrieved from "https://hamtaro.fandom.com/wiki/Tottoko_Hamutaro:_Hamuchanzu_de_Gozaimachu!_Vol.1?oldid=34794"
Community content is available under CC-BY-SA unless otherwise noted.