The Hamtaro Wiki
Register
Don't have an account?
Sign In
Advertisement
in: Episodes, Original Season One, OVA

This article is about the direct-to-video Hamtaro special. For the 2011 re-airing of Hamtaro, see Tottoko Hamutaro Dechu.

Tottoko Hamutaro: Anime Dechu! (とっとこ ハム太郎 アニメ でちゆ!) is a direct-to-VHS OVA released on September 15, 1999. This was the first attempt at an animated adaptation of Hamtaro, and consists of four short episodes.

For reasons as of yet unknown, Tottoko Hamutaro: Anime Dechu was never made widely available for public viewing. There were only two known instances of the series being distributed. The first was that Hamtaro's licensee, Shogakukan, gave out free copies of the VHS to its employees who had children of elementary-school age. The VHS could also be purchased for 1200¥ (equivalent to about $10 USD) via mail-order only from Shogakukan Learning's "First Grade"[1]. This offer may have also been included in Shogakukan Learning's "Second Grade", but this has yet to be confirmed.

As a result of its poor distribution, very little was known about the tape's existence for nearly 20 years - save for a few vague listings in Japanese databases. In 2017, however, admins of the fan-site "Ham-Ham Paradise" acquired a copy of the VHS, who properly documented and preserved its contents online (alongside an English-subtitled translation).

The plot is based off of Ritsuko Kawai's original stories from the manga. Hamtaro is owned by a girl named Natsumi and spends his days frolicking with his friends. He is also notably the only hamster who speaks, and he is voiced by Nao Nagasawa.

Crawling Around, Hamutaro (ドラマ ~ もぐりこんだら ハム太郎): Natsumi comes home and finds Hamtaro is missing from his cage. Shortly after, Hamtaro is revealed to be hiding under Natsumi's blanket, where he introduces himself to the viewer. Natsumi tries to call Hamtaro back, but he runs away and crawls all around his owner's room. Natsumi manages to lure him back with some treats, and Hamtaro is back where he should be.

Hamuchanzu Corner ~ Biscuits in the Vase (ハムちゃんずコーナー ~ つぼの中のビスケット): Hamtaro and the Ham-Hams help Bijou retrieve a biscuit she had dropped. After multiple attempts to retrieve the cookie fail, Hamtaro suggests that he be lowered down into the vase, like a prize-catching crane machine. With this plan, Hamtaro is able to retrieve Bijou's biscuit. The vase wobbles and he begins to fall, but the dog wakes up and rescues the hamster by catching him with a pillow. With Hamtaro saved, Bijou hugs Hamtaro graciously and the episode ends as Hamtaro watches the dog slip away to go back to sleep.

I Love You, Natsumi-chan (ドラマ ~ 大好き、なつみちゃん): Before she leaves for school, Natsumi tells Hamtaro she likes him. In response, Hamtaro confesses to Natsumi that he loves her romantically, but knows that Natsumi only loves him as a companion (Natsumi is completely unaware of Hamtaro's feelings and cannot understand him). She then leaves and meets her classmate, Shirohara, to walk to school with him. Hamtaro becomes angry; he knows Natsumi has a crush on the boy and decides that Shirohara is now his rival for Natsumi's love. He spends the day venting and whining to Wanta about how Shirohara has beaten him for Natsumi's affection. Eventually, he tires himself out from his complaining and calms down. When Natsumi returns home from school at the end of the day, she tells Hamtaro that she loves him very much, which makes him very happy.

Differences with the Main Series 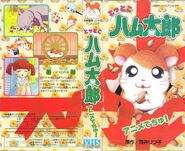